I hadn't planned to make this a two-part post but when looking back on this blog I realized I hadn't really set the stage much for all the work that had gone into just getting the doors open in January 2021. I mentioned in the previous post that the onset of the pandemic was in some ways a real blessing because it came at a moment where we were still able to reverse course and had not sunk a lot of money into construction. What is also true is that when Jim and I did set sights on trying to still open, we put more of ourselves into the business than ever and I truly believe Reclaim Arcade is better for it. We had hired a design firm previously and it was easy to fall into a trap of just signing off on admittedly cool (and often expensive) ideas and chasing goals that we had no expertise in, food and beverage being top of mind there. Being forced to bootstrap the business a bit required us to rein in costs and cut some of the original plans, but also to DIY a bit more. We could use the bones of a cool office space to build something spectacular, which we had started with Reclaim Video years ago and could do again.

It felt incredible to finally get the doors open in January and see the business start earning it's keep rather than just burning capital. The community responded and we had a model that paid employees, kept us from burnout as owners, and was profitable. The first few months were really about learning what people liked and wanted but also just navigating the ever changing discourse around the pandemic. The vaccine was available but not evenly distributed, occupancy restrictions required us to maintain the model we opened with where patrons would reserve a ticket online for a 2 hour timeslot or could book the full arcade for a party during that 2 hours (if no one else had yet booked a ticket). In fact parties were becoming a solid source of revenue for the arcade which we had expected could happen. When it became apparent that May might bring reduced restrictions around occupancy and masks we realized in order to remove the 2 hour ticket restrictions we needed a way to maintain parties. So I grabbed my Devo suit and got to work.

Readers of the blog here may remember just a year prior how I had built a green screen studio for the hosting office. In fact the video shared in the previous post was recorded in front of this wall. Well unfortunately with the push for work from home and the team getting only more distributed its days were likely numbered from the start and it became clear this room and the adjacent hallway could serve as the first expansion of the arcade to be a private party room. Without the ability to reserve the entire arcade (which would require closing to the public when we needed to be open during business hours) we wanted to instead offer a private room with included arcade passes for birthdays, retirement parties, or even just groups who wanted a space to hang out and bring in food and drinks. But the room was going to need a makeover in terms of paint job and furniture.

I got things started with taping off everything and hitting it with a coat of paint and then Jim arrived from Italy to bring it to the finish line we got the furniture in, mounted artwork and cove base, and added some fun details. Yet again here we were rolling up our sleeves and getting to work rather than attempting to outsource it, and the work paid off. Private parties continue to be ~30% of our revenue and on any given weekend that room is regularly booked with people enjoying the arcade as they celebrate an event.

The arcade was finding new growth during the summer and by June we decided we needed to make good on the idea of my not having to be so intimately tied to the space and hire a general manager to help run the day to day operations. As true fortune would have it before we even announced the position, I emailed the candidate that we previously weren't able to move forward with when COVID changed everything and she was still open to working for us! Paula Epperson has been working as our general manager now since June and become not only a key partner in its success but also a friend. I have a tendency to move rapidly on decisions and Paula not only plays off that but also brings her own ideas to the table as well. With her help we brought on more staff and dialed in scheduling. In August and September she held event nights like Big Hair Band Night and Star Wars Night which were an absolute blast.

As we headed into the Fall with the arcade continuing to grow a community around it my mind started to turn back to the idea of the "missing element" that so many had said they wished we had: food and alcohol. If I've learned anything over the years as a business owner it's that everyone has an idea for how you could be doing your business better, and so you take it all with a grain of salt. But I knew myself that this one warranted further discussion, it was a gap keeping people from making the arcade something more of a social space. In talking through it with Jim the conversation turned more to our own individual passions and interests in the arcade which had changed dramatically. Whereas I was finding myself more than ever embedded in the success and process of growing the arcade, Jim was realistic in his ability to contribute from afar and wanting to focus more on our hosting business and the prospects we still see for that into the future. On the best of all possible terms we figured out how to make things work so that I could move forward as sole owner of the arcade and pursue my vision for the space and Jim could return to focusing on the hosting side. To be clear we are still partners and I am still a part owner of Reclaim Hosting lest their be any confusion, but I've reduced my role in the company to allow me to focus on this new passion and tackle the hurdles that adding food and alcohol would bring. Jim encapsulates my own thoughts more than I ever could in his weekly update from the end of December when he says that we "have an unbelievable partnership that’s lasted more than a decade" I think it speaks to just how well we work together that we were able to figure out these next steps for both us quickly and amicably.

So that weekend I bought a food truck.

What was that about a tendency to move rapidly? 😀 I had a vision for transforming the back parking lot of the arcade into an outdoor space with seating, a fire pit, the food truck for food, and some outdoor games like cornhole. My good friend GNA happened to be in town right when I was working out all these details and helped me develop and refine them as well as a bit of sweat equity building concrete benches. The food truck got a sick art wrap, after lots of paperwork the city signed off on the project, and the end result was pretty damn close to the original vision.

What began as a plan simply to offer food to our patrons turned in to much more when I connected with the folks at ABC Consulting who helped me navigate the process of acquiring an ABC license for the arcade on the basis of having an outdoor kitchen (the food truck). A lot of paperwork and process later and we secured our health permit and ABC license the week of Thanksgiving. In hindsight it moved very quickly but at the time it seemed to be frustratingly glacial pace. Black Friday was a banner weekend of people coming out not just to play but to eat, drink, and enjoy the fruits of this labor.

Our final event of the year would be a New Year's Eve Bash and with the new ability to serve food and alcohol I planned a ticketed event that would go until 2am with the Times Square ball drop happening on the projection system. We sold out for the event and it felt very much like not just a celebration of a new year but a celebration of what we had accomplished already in 2021 as an arcade. Here is to many more years to come! 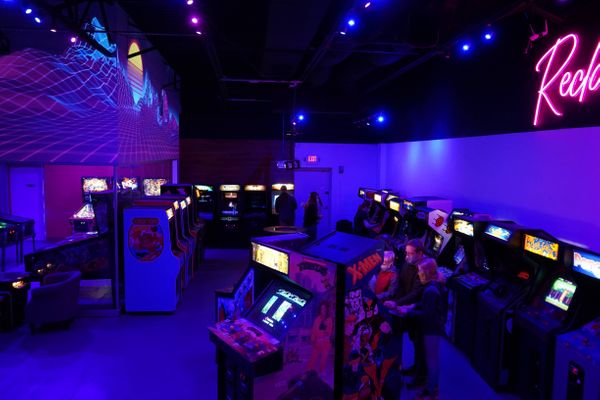 This blog ain't dead yet but as is typically the case I've been head down grinding on plenty of different things, but these days most of those things look like retro arcade games. It's hard to believe Reclaim Arcade is about to celebrate 1 year of the doors being open