I had a very cool moment a few nights ago when I was sitting in my graduate course on learning theory. As a part of the course we've all been assigned a particular theorist and we're asked at some point in the semester to give a short 15 minute presentation. The first round was Thursday and one of the theorists being presented was Dr. Stephen Brookfield. Brookfield is well-known for his research on critical thinking and reflection. As the student moved through the slides she pulled up a large image that was a visual note's style breakdown of becoming a critically reflective teacher. I thought "wow, that looks just like Giulia Forsythe's work" and sure enough in the bottom corner was her signature! The student had found the image on Brookfields website and found it perfect to illustrate the concept. [caption id="attachment_1002" align="alignnone" width="622"] 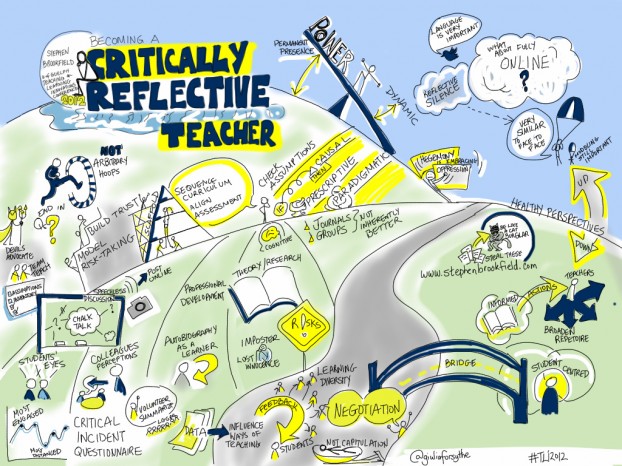 Becoming a Critically Reflective Teacher by Giulia Forsythe[/caption] As if that wasn't cool enough, I found out a few minutes later after tweeting about the experience that Giulia's image was seen by Brookfield after she created it while listening to his talk and posting it online, and that he had gotten her permission to include it in his next book. How's that for the power of these open spaces we navigate? So a person I meet through ds106 (and later had the pleasure of hanging out with in person on a few occasions) starts to develop her artistic skill through visual notetaking and publishing her work with open licenses online. As a result of that a popular learning theorist is now using her work on his website and publications, and that work is then rehashed in front of me as part of my graduate courses in instructional design. As big as this world wide web is, it's amazing to me how close and intimate it can feel at times.