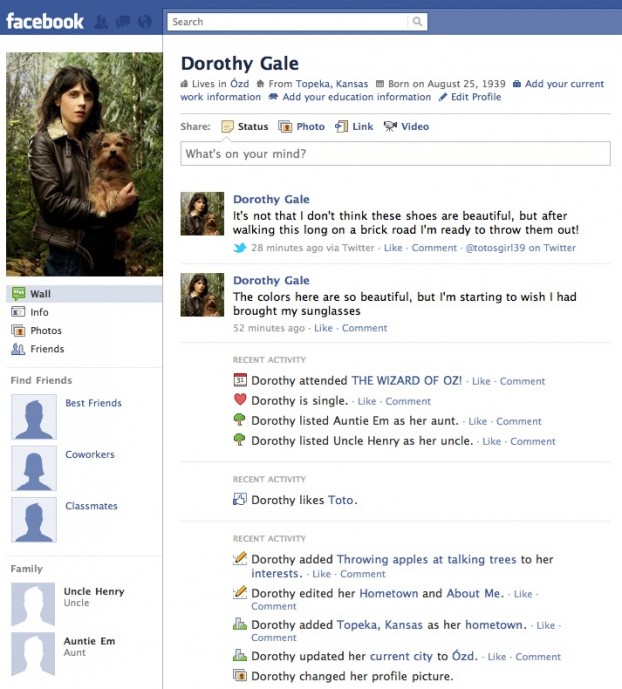 I have a confession to make. I've been playing around with a few of the more popular "web 2.0" (God I hate that term, but I digress) sites in an attempt to recreate a story. And it's a lot of fun. But I think I can do better, with your help. ### The Setup

Continue the story of the Wizard of Oz, and in doing so create a whole new story and world, by bringing the characters to life through Facebook, Twitter, Flickr, etc. The sky is the limit. Perhaps Auntie Em and Uncle Henry have a phone number, that you setup using Google Voice and record a voicemail message. The characters all talk to each other in realtime, commenting on Facebook, leaving notes, playing games together. Maybe Uncle Henry spends all day on FarmVille and Auntie Em doesn't quite "get" Facebook and leaves inappropriate comments riddled with bad punctuation (Ah relatives.) A whole new story takes hold using modern day programs and tools in a new way. Boring Disclaimer: Most websites prohibit "fake accounts" in their terms of service and everything you create in this project has the possibility of being wiped away with the stroke of an angry engineer's keyboard. But you're used to breaking the rules no?### Current Status

I began this on my own this week before realizing the potential awesomeness of this project is in the collaboration (boom, another Web 2.0 term, and that one's on the house) of all you crazy folks to build this alternate reality. Here's where we are so far: - Dorothy Gale Born: August 25, 1939 Email: totosgirl39@gmail.com Google Profile Twitter Facebook

There's obviously so much room here for creativity so go out there, grab a character and get to work. When you create a character comment here and I'll update this post so we don't have too much duplication. It'll either be the coolest thing you've done with these tools since posting your lunch at work today, or it will be a complete a total failure (and still be pretty damn cool). You in?