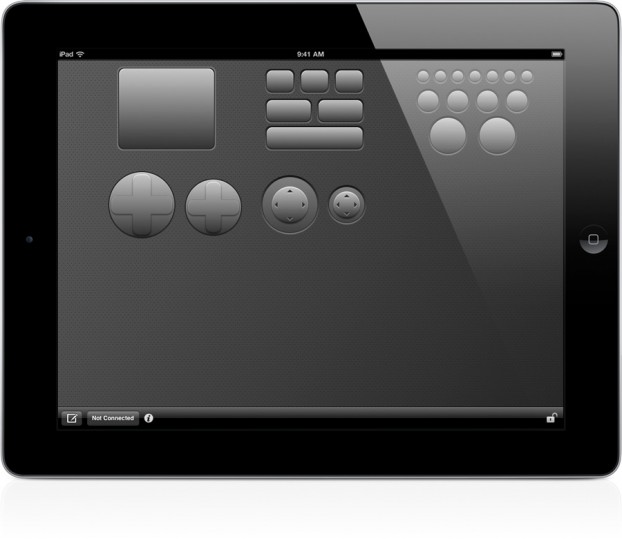 Recently we at DTLT have been cutting our teeth on live video production through the Summer of Oblivion ds106TV series and more recently with DTLT Today. The more we play with these tools the more we realize how powerful a low-cost video streaming solution is to the idea of a distance-learning classroom. The system that powers both the streaming and recording (as well as applying layers and effects like the Green Screen dynamically) is Wirecast which is a really powerful and elegant piece of software for Mac or Windows. One thing that we've found, however, is that when broadcasting it is difficult to focus on changing shots without having your audience see the top of your head constantly as you fumble with the Macbook Pro. A dedicated person in a "Producer" role would solve this, but they're not always going to know what you want to put up on the screen and the timing. Plus, that requires a dedicated person to an offscreen role, and we're a small group of people just starting to play with these tools.

Wirecast has built-in keyboard shortcuts to switch between your "Shots". The trick is to name each shot with a number at the beginning, for example "1 Main Camera" or "2 Remote Skype Video". Then by holding the Option key and pressing the corresponding number on the keyboard the shot will be activated. Combine that with making sure "Autolive" is selected and when you press the commands the shots will switch on the fly. You could use a wireless bluetooth keyboard to control all this, but you're still probably going to be looking down a lot to find the keys. A more elegant solution I found was a $2.99 app for the iPad called Custom Keypad which allows you to build your own layout of buttons on the iPad and map them to corresponding keyboard shortcuts. The app connects to your computer wirelessly using VNC to send the commands. What's nice about this solution is that you could just as easily use the iPad and this program to become a wireless controller for many other pieces of software. Need a remote editing deck for Final Cut X? Done. Control a software mixing board from the stage? No problem. The iPad becomes the blank slate that control a variety of programs with very little extra work. They provide a few layouts with the program to get you started and have some user-submitted ones available for download as well. An alternative (albeit less elegant solution in my opinion) I found in the Wirecast forums was using a remote display app like Air Display to control the software directly with touch. This certainly works but you're not going to be able to customize your view, enlarge the buttons for your various shots, and ultimately will probably be zooming in a lot to make sure you hit the tap targets (which means staring downwards quite a bit to get it right). With the Custom Keypad app you make sure the buttons are large enough and ordered to suit your needs so a passing glance is all you need to hit the right button. One other thing we're in the process of getting to do some more testing is a Korg NanoKontrol panel which will send Midi commands to a computer and is completely customizable. Although it's USB and not wireless, the ability to customize actual hardware buttons and sliders to control the Wirecast deck will make the role of "Producer" even more seamless and fluid.