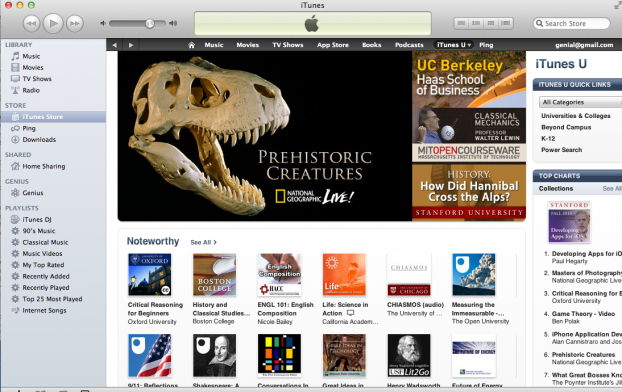 A few weeks ago when I started playing around with Wowza for streaming I started thinking about the value iTunes U offers for the University. We have an iTunes U server on campus that never really got much action, in part because it was nothing more than a Linux box running Apache. Users had to FTP to the device to send their media to it and then use links to hotlink to the content. No embeds, no fancy interface, just simple storage and serving. UMW has an iTunes U account but getting that content into their interface is maddeningly difficult. It's not as simple as uploading content, you have to provide specific media feeds to the system for it to feed in. Of course naturally 3rd parties have seen this as an opportunity to sell more software overtop of the "free" iTunes U interface. But what value does iTunes U give us in return? iTunes of course is an integrated platform for folks who use it for their media. As a podcast directory it's a great central location. Ideally they want to be the central media hub for EVERYTHING but if you don't have an iDevice or run their software you don't get to play. That makes no sense for a higher ed institution and it's not a space I'd like to see UMW investing time and money into just to say we have "a presence" there. Ironically when researching iTunes U I came across this post by Jim Groom which hits the nail on its head. From 2007 he could already see that we had the possibilities with Wordpress to do something better. I think he was right, and I think it's time we built that. UMW Blogs has reached massive scale for a campus our size and it's a shining example for the functionality of Wordpress Multisite (now a part of Wordpress Core). I envision this alternative iTunes U interface, which I'll call Media U for now, running on this same system. We already plan on using a replacement media server to run Wowza for live streaming, but it can also do video on demand. This takes care of our storage, encoding, and serving. Institutions who don't want to host in house could choose the EC2 route or alternatively choose platforms like Blip, YouTube, or Vimeo. Media U would be a separate network extension of UMW Blogs, allowing for the same users to access the system and create their own "Audio/Video Series". The theme of these series pages would be standard allowing the user to choose their own album artwork and begin uploading each file, as individual posts. Wordpress will handle the RSS feeds automatically and it's possible that we could even feed all this into iTunes so we have our "presence" there, whatever that means, but it's not the focus. Automated syndication of our content distributed from our servers to the web. I began working on this with a standard install of Wordpress and activated it as a Multisite installation. Right now I'm playing with the theme, which I'm building on the Skeleton Framework so it will resolve on mobile device sizes just the same as on the desktop (which I think is important since mobile devices are quickly becoming a key way to consume content from the web). You can start to see an example of all this taking shape with a generic page at http://timowens.me/dtlttoday. Noticeable right now is the lack of media files. Right now it really is more about working out a good looking theme that fits as many use-cases as possible. 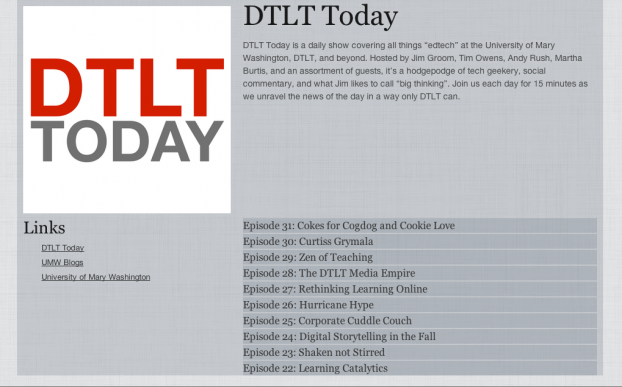 This is already turning into a fun side-project at DTLT and it just one example of where being in this position gives me the freedom to choose a passion and run with it. Taking ownership of our media content is a natural extension of the publishing platform we built years ago and Wordpress as the management system for it is, to use a Groom term, "a layup". Freeing ourselves from the restrictions of a locked in media system used by few and opening up a wealth of media content to the world via the Web is an exciting prospect and I'll be updating right here as the project progresses.