I've recently been thinking more and more about documentation and the ways in which Reclaim Hosting as well as the growing number of schools doing Domain of One's Own answer the common "How do I X?" questions that come up. While there are certainly plenty of unique scenarios that require a nuanced answer, in many more cases we have communities that are striving to learn more about common topics and asking similar questions. As a result various Knowledge Base Silos have arisen to meet that need. We have http://docs.reclaimhosting.com/, Emory has http://docs.emorydomains.org/, OU has http://create.ou.edu/docs/, and the list just keeps growing. Finding models for powerful reuse here would be a huge boon for a lot of folks.

When I was at UMW we approached the reuse problem by setting up a Dokuwiki install with the thinking that a flat file system would make it much easier for someone to grab all of our documentation and drop it in as a kickstart to building out their own Knowledge Base (such a goofy term that is). I even managed to have it syncing with GitHub at one point https://github.com/DTLT/dooo. That method has driven at least some reuse with other schools like Emory and OU. At Reclaim we built out a site using Grav so that regular markdown files would be used and integrated that with GitHub as well https://github.com/reclaimhosting/docs. These approaches start to get at a solution, but never get very far. Forking a doc site will give you the kickstart you need, but as soon as that fork happens it's much more difficult to pull in new work while keeping the institutional-specific knowledge you've added in the meantime.

It's with that lens that I read Mike Caulfield's Choral Explanations and OER post. While it's long, I encourage you to spend the time digging into it as there are many great gems and I think Mike does an incredible job of explaining the hard problems and where we are currently. His lens is OER but for me the documentation use case kept creeping back in. Mike and I actually explored some of this back when I was at UMW with the Dokuwiki approach and had looked at some federated wiki type plugin approaches to sharing content between installs. Since that time I know Mike has done a lot with Smallest Federated Wiki and is now building Wikity to accomplish similar goals.

So I find myself wondering what this tool might look like for my needs. Perhaps I need to play with Wikity to see if that could work here. Or maybe it's something else entirely. Maybe this is a problem that's just hard to crack in a federated way and a more centralized approach is necessary. Maybe it's Maybelline. But this post is my attempt at talking out loud and starting that conversation. It's something I've been thinking I might suggest as a potential unconference discussion during DigPed at UMW as I know Amy Collier will be there who is not only running Domain of One's Own at Middlebury but also has been experimenting with Wikity herself. I'd love to get feedback from others and start to really figure some of this out. 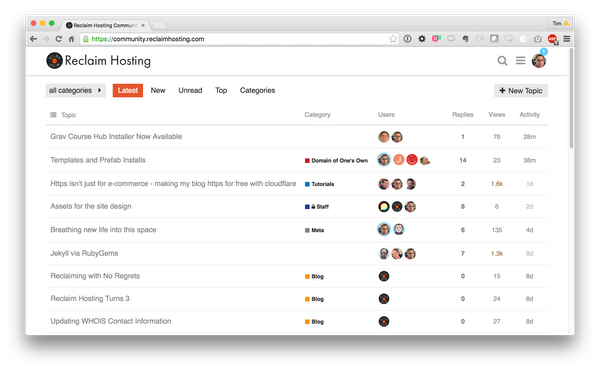 I recently received a support ticket, not so much asking for support, but rather wondering about the status of https://community.reclaimhosting.com/ and why it wasn't promoted more. The

So apparently emoji domains are a thing, though a complicated one at that. I blame equal parts boredom and Bud Hunt (a very persuasive individual) for registering one last night. Here's the skinny on the how and why. First, how do you even do