Ever since we replaced the built-in app installer in Plesk that we use for the Domain of One's Own hosting panel with Installatron there's one piece of software I've been meaning to play around with, ownCloud. The elevator pitch is that ownCloud installs on your hosted space and functions exactly like Dropbox (including desktop and mobile apps) for file sharing and storage. But in reality there a lot more to it than that, hence this post. I first read about ownCloud when D'Arcy was experimenting with it last year. Once I had the ability to install it with 2 clicks using an automated installer it was a no-brainer to setup a subdomain for it and start experimenting. I've used Dropbox for years and never had any issues with space thanks to a lot of promotions that had my free account allowing 12GB of storage. Dropbox also integrates really nicely with a lot of other services (anyone with an iPad that tries to manage documents will tell you its an absolute must). But I wanted to see how far I could push using my own space and frankly I was surprised by just how good ownCloud was. The install couldn't have been easier. Even though I used the automated installer from Installatron on Hippie Hosting, Andy Rush told me he used an installer script from ownCloud's site and said it was just as easy. Here are some of the key features that really make ownCloud shine: 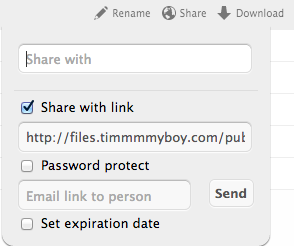 In Dropbox I made heavy use of being able to grab a public link and share it with others. I was really glad to see this was supported in ownCloud for any file or folder on the service. I was surprised to see they had even more granular options for how you share an item. You can have it send email, but also password protect the shared item. You can even set an item to be shared for a specific time period and then revert back to private. It's really awesome to be able to easily share a document with someone and have them grab it from your space. The shared items also have a nice preview page like this example. ### Desktop and Mobile Apps

The idea of storing your files on your own server space is only convenient if you can build it into your existing habits and workflow. So I was really happy to see a desktop application as well as iOS version (They have Windows, Mac, and Linux clients as well as iOS and Android on smartphones). One really nice feature of the desktop client that surpasses Dropbox is that I can include multiple existing folders and ownCloud will grab them and sync them to my server space. I much prefer that method to feeling like I have to grab stuff out of my documents folder and put it in a "special" folder for syncing. The actual syncing works very much like Dropbox with a menubar app watching folders in the background for any changes and pushing them up or down from your space. One thing Dropbox had that I wish they would add to the desktop app is the ability to grab a shared link from the context menu. Right now I have to go to the website to get that public link. On iOS the app is pretty basic but does what you need it to do, grab things from your space and either shoot them off in an email or download them to the Camera Roll to use in other applications. Of course a lot of iOS apps have built-in support for Dropbox, not ownCloud, so if there's something you rely on with that you're probably going to want to keep Dropbox around (pro-tip: add your Dropbox folder as a folder in ownCloud to sync with, best of both worlds). ### Users and Groups

I don't use this feature but it's worth mentioning because ownCloud can connect to LDAP (Active Directory) making it a really nice solution for setting up teams and institutions with their own space and share amongst themselves. Something like this would have been a dream come true for a security officer concerned about everyone putting their work documents on Dropbox's servers. You can also just use the users area to create user accounts for people you want to have access to everything, so a shared file storage area is pretty simple to setup (maybe this is something DTLT should think about doing). ###

I heard someone mention to me once that the biggest threat to losing files is not from accidentally deleting them or having hard drive failure. What happens more often is that someone accidentally saves a file before realizing they've overwritten really important stuff. With ownCloud you can access all previous versions of your files to protect you from...well yourself. What I'd really like to see them add is the ability to keep deleted files for a certain time period. Dropbox does this and it's something that has saved my butt more than once. ### Third-Party Development

There are already quite a few apps built around ownCloud that can be integrated with the service right from the admin area of your ownCloud instance. Things like a photo gallery viewer for sharing folders of images, Google Docs integration, Dropbox integration, an ePub reader, and a URL shortener are just a few add-ons that make the service that much better. Seeing development on top of a service thrive is always a good sign for the health of an open-source project. So yeah, needless to say I'm pretty jazzed about ownCloud and I'm having a lot of fun with it. At the very least, the ease in which I was able to integrate it into what I was already doing with Dropbox made it a no-brainer switch. I can throw a file in a folder and grab a shared URL pretty easily and it's all happening in my space. Yet another reason to own and control a Domain of One's Own. :)