I've been doing a bit of housekeeping to my personal digital identity the past few days. It's a slow process to figure out what I need, what I don't, where it all should live, etc. When I think of my own domain I'm reminded of the saying about the cobbler's children having no shoes. For all the amazing work we do at DTLT pushing the idea of the importance of digital identity and the work Jim and I do with Reclaim Hosting to make that easier for as many people as possible, I don't often sit down and think critically about this stuff. Hell, yesterday I blogged for the first time it 8 months so that should tell you all you need to know about where I am.

But I've been changing things up a bit and trying to find a good sweet spot for things. For example you may have noticed I'm blogging at a new location and wondered what that's about. I haven't gotten rid of the timmmmyboy.com domain but I've decided I want to start slowly moving towards something more reflective of me and less reflective of a poorly-chosen screenname when I was a teenager. That's a hard thing to move away from though since I've made that my username everywhere so I think at the very least it starts with where I choose to publish stuff like this. I've setup a redirect to this domain which will be my blog going forward.

You may have also noticed that this is a subdomain of http://timowens.io (damn you're observant) which is running something else. I originally set the domain up to run a beta version of Known which I still plan to keep using and experimenting with. I'll be writing much much more about my adventures with Known and what I love about it in future posts. But I struggled a bit with this because in order to get back in the habit of writing regularly I need a platform that is really good at just getting out of the way and letting me do that quickly, one that is nice (because I'm a sucker for aesthetics), and one that is stable. Known is in beta and it questions so much of the status quo for the better, but at the moment what it doesn't do well is long-form blog posts. There's absolutely a space to publish those, but key necessities like saving a draft to come back to aren't there yet. I can't publish on a space that requires me to grab the HTML and save it locally to paste back in later. Status updates, photos, audio, and bookmarks are all very easy to jump on and quickly push out but for thoughtful writing I have to have a space that doesn't require me to hit the send button or do a ton of work to save elsewhere. I considered begrudgingly going back to WordPress but I honestly use WordPress enough for really powerful things that I wanted something much simpler for writing. I decided to fire up a small VPS and play with Ghost again and I'm so glad I did! 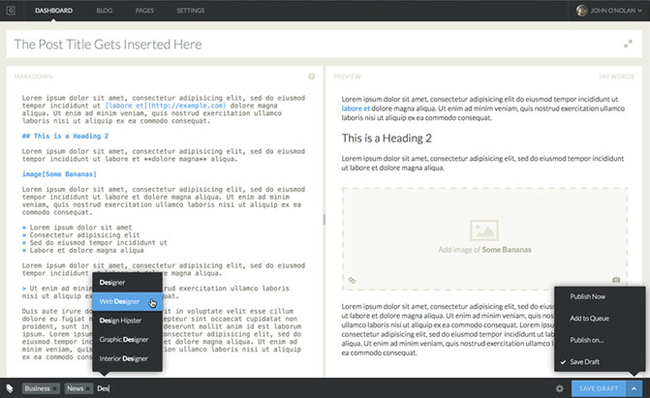 Ghost is a dream come true for writing like this. It's beautiful, it's fast, and it's stable. The Markdown editor takes a little getting used to but I've been continually pushing to memorize more Markdown in the past year so I'm happy to have that requirement to push me more and I think I think that syntax will migrate well between platforms. Uploading images is dead simple. And it's got a very active community that I'm looking forward to digging into to see what else is possible since I've only just started to use the out-of-the-box stuff with it. That being said I still contribute to Known and actually have several plugins I'm in the process of developing for it. Jim is using it with his course and I think it has a ton of potential for allowing us to get past this idea that RSS is necessary. In a world where almost every piece of software has an API it's amazing to see what Known can do with syndication that is instant and easy. I think the publishing tools have a ways to go but the technology is exciting and anytime I get to play with software that excites me I know there's something there. In fact one of the first things I want to see is how I can push and receive webmentions from a Ghost blog. Known has exposed me to a great Indieweb community that not only has developed underlying technologies like that, but also has an ethos that is right in line with the goals of Domain of One's Own and Reclaim Hosting.

I'm also determined now to make Ghost available on Reclaim Hosting as a one-click install. It's that good that I will stop at nothing to make that happen for more people. It's a particularly difficult challenge since it runs on Node.js instead of Apache, but a small handful of examples on the web give me hope and I want to also use it as a reason to push beyond the boundaries of traditional LAMP environments. So keep an eye out for that in the near future.

So welcome new and old friends to my new space. I'll be migrating everything from previous blogs back onto hear slowly so that I have a single place to find all posts (don't worry, I know enough htaccess to keep all those links alive and send them to the right place). Next step: That RSS reader I haven't opened in several months....