One of the things I love so far about the P2PU course I'm taking is that it starts at the very basics and forces me to address things that I skipped over when I was self-learning HTML and CSS years ago. One of those tasks was finding the right editor. It seems like a simple choice. I used to take pride in building sites in Notepad back in the dark days of using Windows. Recently I've fired open TextWrangler for most of my editing work, which is nice because while it's a freeware version of the more advanced BBEdit it still left me having to save files, switch to Cyberduck, and upload. Cyberduck would at least allow me to edit a file in place, but that's not a great solution either. I realized with this task as I started playing with some of the great Mac coding editors out there that a more integrated solution was desired and available.

The first editor I tried out was Espresso by the folks at MacRabbit. From the site I could see it was going to be a beautiful editor and it did not disappoint. Tag autocomplete worked well as did server sync via FTP. I also liked how they would breakdown the heirarchy of tags on the sidebar to the right. When digging through code it's hard for me to find certain areas so being able to contract and expand groups of tags is important. I have to say using the CSS editor I found more difficult than I expected. Visual tools for selecting styles was great, but when I used the color selector and dragged my mouse around briefly it spit out all of this code. 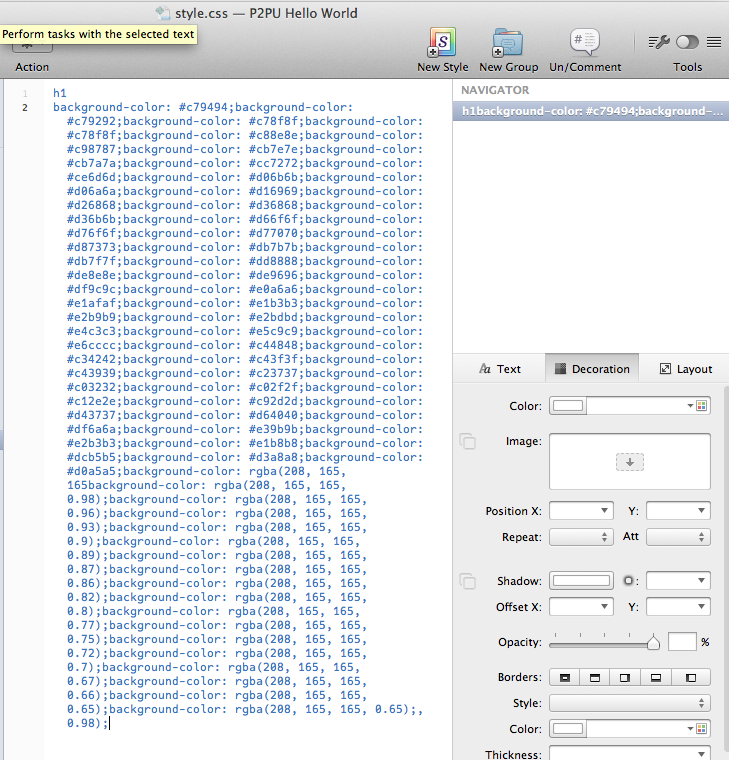 The other thing to consider of course is cost. If I want a decent editor I'm not going to get it for free without tradeoffs. Espresso is a 15 day free trial and $79 purchase on their site to buy (they are not available in the App Store as of this writing).

The next editor I was itching to try was Coda by the folks at Panic. I'll say this much about Panic's products: Jim Groom rarely spends money on software and he will say without a heartbeat that their FTP client Transmit is well worth the money. The company has a reputation for beautiful products that fit the Mac environment well and the Apple Design Award for Coda is proof of that. Coda is simply gorgeous and a treat to use for development. Editing the code felt fluid, the CSS Editor and live previews were great. Syncing with a server worked quite well (like I said before, these people wrote Transmit, so you can imagine how great it is to have that functionality in the sidebar of a great editor). However there's one huge tradeoff here: Coda is $100 ($99 on their site, but $99.99 on the Mac App Store). Again not cheap, but no doubt it's a quality product. Being on the Mac App Store is nice as well because I'd get updates automatically delivered through there and be able to download it again if I lost it without having to deal with license keys and such. They offer a 14 day trial download on their site as well, similar to Espresso. So the goal of this task was to choose an editor, or rather have it choose you as you played with it. If I'm honest with myself I'd say Coda is the clear winner of what I tried. It will just be a question of whether I can afford to spend that kind of money on something that is only partially a part of my day job. For now I have a 14 day free trial so I'm going to stick with it and let it impress me more (or perhaps let me down in ways, we'll see).