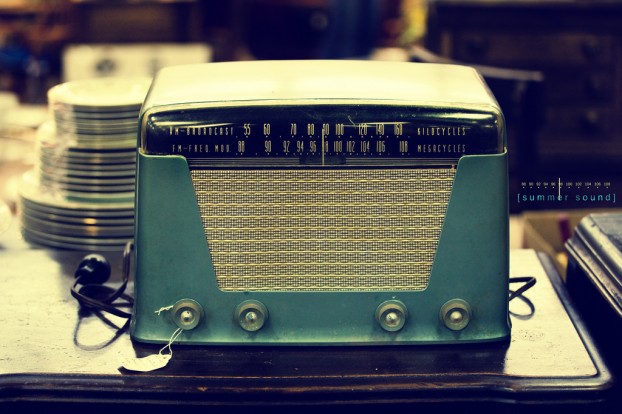 Image Credit Brandon Warren[/caption] The combination of a few late nights with the wife and kid out of town and our newly installed high-speed internet connection have meant the ability for me to do more interaction with ds106 by way of broadcasting on the radio waves. I never would have expected such an ancient technology like radio to have such a viral effect on this course, but it's completely addicting! I started rocking out some karaoke tunes on Friday night and I was joined by the Reverend Bava himself and Brian Lamb. I almost recall a late night Skype conversation to Afghanistan as well, but being quite a few drinks in at that point and with early morning obligations I can neither confirm nor deny.

I want to share my setup here because I think it's worth seeing how easy it is to do something that on its head sounds rather complex (Broadcast online audio both from your computer and microphone at the same time). I am using a combination of two programs, Ladiocast and Soundflower. Ladiocast is a free streaming program that can handle multiple inputs/outputs and also has level control and monitoring. Soundflower is a free extension to pipe your computer audio into a program as an input, effectively making what you hear on Youtube or iTunes also be broadcasted through Ladiocast. DS106 Radio uses the MP3 format for streaming, which unfortunately requires a bit of extra work with Ladiocast. You want to install the version from the link above, not the version currently in the Mac App Store (MP3 streaming seems to be completely removed in that version). We need to install the MP3 encoder located at this link which is meant for Audacity but with a quick change it will work with any program. Install the file, then open Finder and hit Shift+CMD+G and type /usr/local/lib and hit enter. That will take you to a folder with a lot of random files. The audacity MP3 installer actually installed the file we need in a folder here called "audacity". Go into that folder, grab the file libmp3lame.dylib and move it back one folder to the main /usr/local/lib folder. Still with me? Great, we now have MP3 streaming support in Ladiocast, and I promise it's worth it. To save time I'm going to post a few screenshots that show what my inputs are set as along with the settings to get your stream up and running. You will need the password so ping @grantpotter on Twitter and let him know what you're interested in streaming and he'll get you setup. 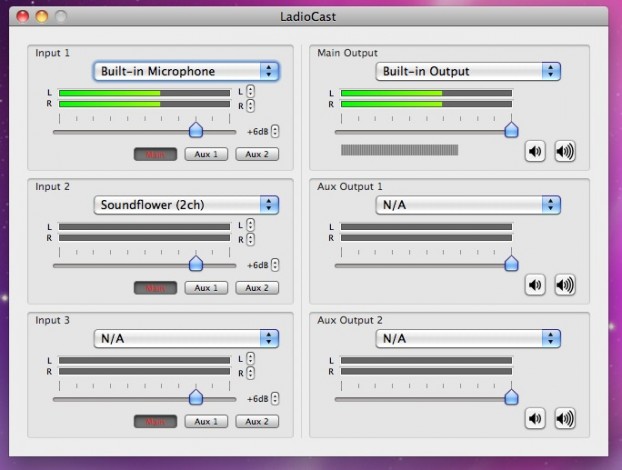 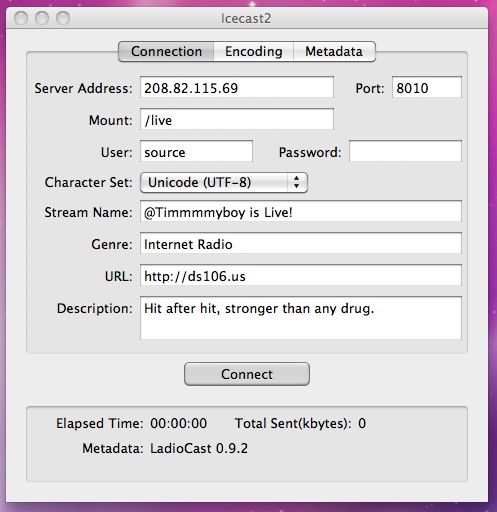 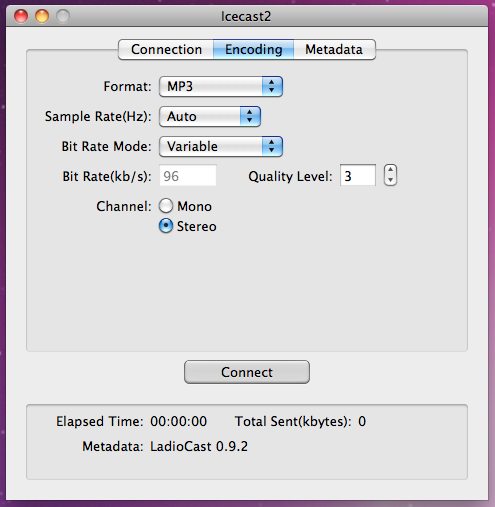 As you can see I have a total of 3 different sources I could pull into the stream, but with this setup I'm just using my mic and Soundflower. The great thing about this is that I'm also able to plug in a pair of headphones and Output to them, so I can hear exactly what's being broadcasted and adjust my levels accordingly. I would assume you could work some magic to use the Aux Outputs to push your broadcast back into another program such as Skype, but I haven't gotten that far into it yet or had a need. Hope this helps more people get rockin on DS106 Radio, it's a lot of fun once you get the technical stuff worked out and Karaoke Friday shall return so bring your A game to the table! Update: I decided a simplified flowchart might (hopefully) make the whole thing a bit easier to understand. Maybe it doesn't but damn if it doesn't look spiffy. 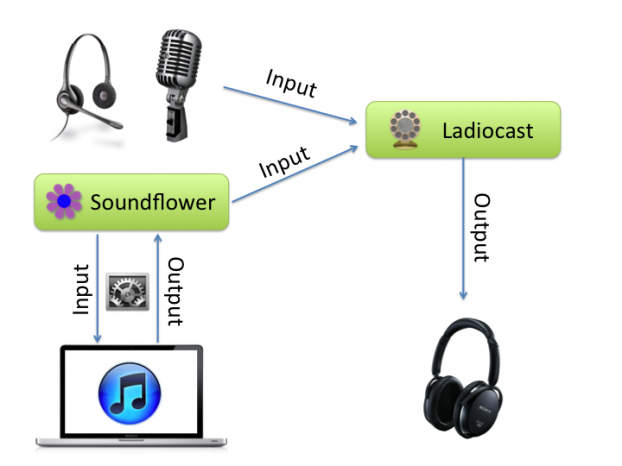