Since Reclaim Hosting was founded in 2013, cPanel and the traditional "LAMP" stack have been at its core. LAMP is an acronym for Linux, Apache, MySQL, PHP and some of the more familiar applications you love like WordPress and Omeka run that tech stack. This comes with its own limitations as newer software moves the way of more advanced scripting languages such as Node.JS and some of our more advanced users crave the ability to run a variety of software that likely won't fit this very specific set of limitations. Projects like Docker have been exciting to watch and Jim has blogged about the potential revolution of containers and what they could do for hosting, both from a personal and public cloud perspective. How could we tap into this potential but maintain our commitment to making it dead simple for end users? I teased a bit in my previous post about getting this Ghost blog up and running on a new platform we've started to explore and I think it may have some of those answers.

Cloudron is a platform to allow you to easily run a server with apps self-contained, easily updated, and secure. What I feel sets them apart from the pack is that these applications are Docker containers which removes the traditional barrier of having to choose what your tech stack will be for a particular server. Want to run a PHP application alongside a Node.js app? No problem. You can even fire up a LAMP setup alongside an app that uses MongoDB and Nginx. Some of that might get technical but imagine the ability to run both Android and iOS from the same phone and how that might change our perception of what's possible.

Traditionally difficult concepts like DNS mapping and SSL provisioning have also been made easier with Cloudron. You pick the domain you want to run it on and assign a wildcard subdomain to the server and you are able to fire up apps choosing the subdomain you'd like them to run on and everything is SSL by default. chat.yourdomain.com can be your own Mattermost install, code.yourdomain.com can be your private git repositories running Gitlab, etc. And you're not limited to that one domain, simple CNAME mapping allows you to map external domains with ease. There is a large list of supported apps at https://cloudron.io/store/index.html with more being added all the time, but also a software development kit that allows people to build their own. Cloudron's pricing model is that the platform is free and open source, and you can pay monthly to receive regular updates to the platform and the software you install (they also offer managed hosting if you don't want to run your own server). 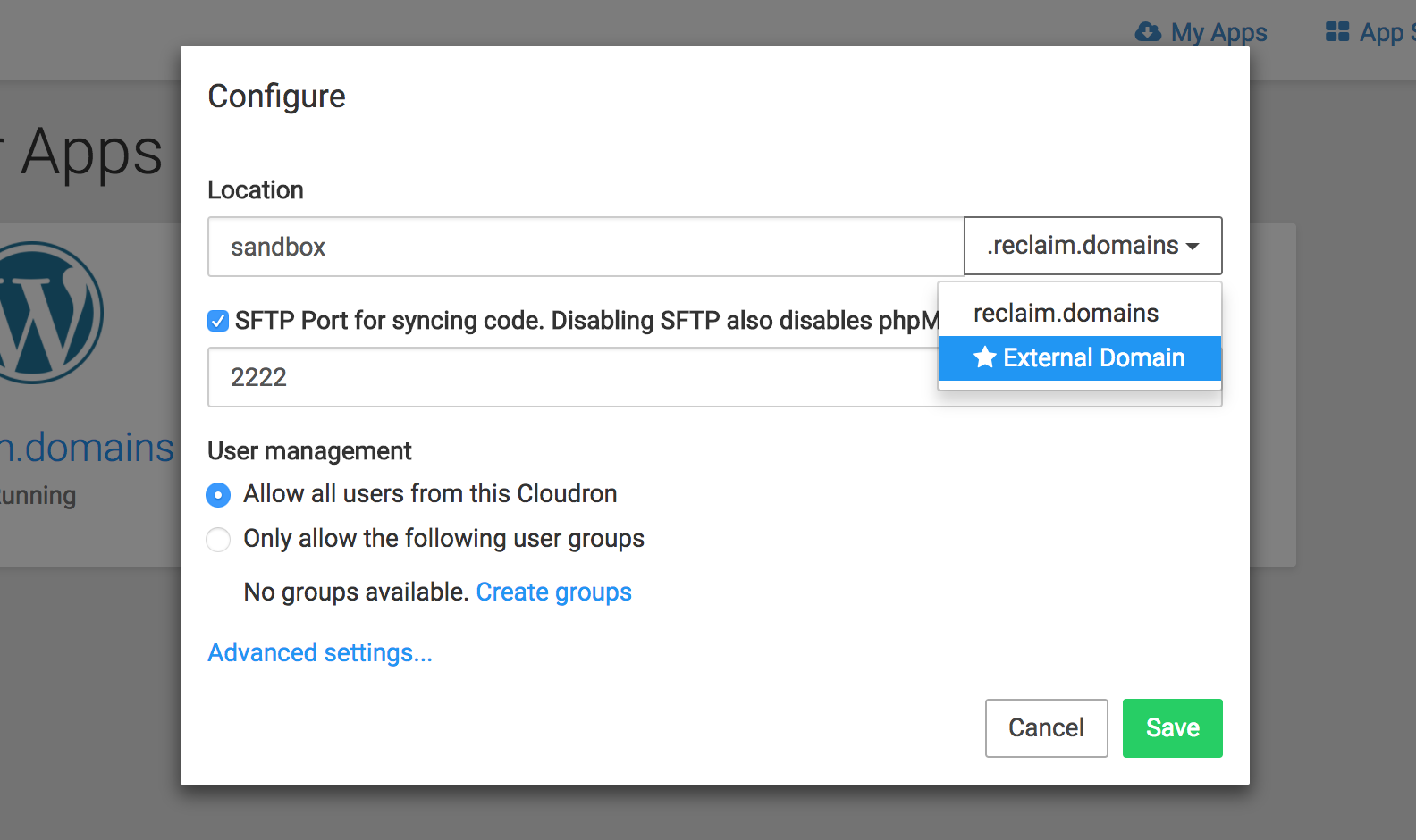 There's a good chance that even with as easy as Cloudron is to run, most users don't want to setup a server on their own, and that's where I think Reclaim can play a role here. I'm imagining a model where we provide infrastructure for Cloudron instances for our users. Cloudron has an API for their interface meaning we could allow remote installation of applications. You want to run Ghost? Sure thing, it's now at yoursubdomain.reclaim.domains. We could also register a top level domain or map a subdomain for you all in one slick process. As easy as I think Reclaim already is for users, I think this could be even more streamlined. Right now someone has to pick the domain they want (no longer a necessary first step), potentially create a subdomain, install the software, and then start building. What if they could just choose the app and get started? Worry about whether they want it on a different domain later.

I see a ton of potential for this to expand what we offer and pave the way for the future of hosting, maybe even the future of Domain of One's Own. And a model still built on open source, allowing full ownership and portability to take your work with you. I'm still unpacking and learning and testing, but couldn't wait to share what we already know and start soliciting feedback for what the future could hold.