One of my coworkers, Martha Burtis, recently came to me with a challenge for the 3D printer (ok admittedly not recently, more like beginning of the semester and I've been slow to get back to it). Her family is big into Volkswagen's (mostly as a result of her husband Eric having grown up with them) and they regularly take their 1971 camper to shows. Eric blogs regularly at Zero to Sixty...Eventually with the upkeep of the bus as well as other awesome Volkwagen-related things like his daughter putting together the Lego Volkswagen Bus. So Martha brings in a small piece of their bus that has broken. A part I'd later learn is called the "Cabinet Door Check Strap". It's not a very difficult design and given the size she wondered if I could model it and print it. The thing about this part, as with many VW parts for vehicles of that era, is that while not a complicated thing it is hard to come by due to the age of the vehicle. And apparently these straps break all the time. So I fired up Google Sketchup and designed a replacement strap. 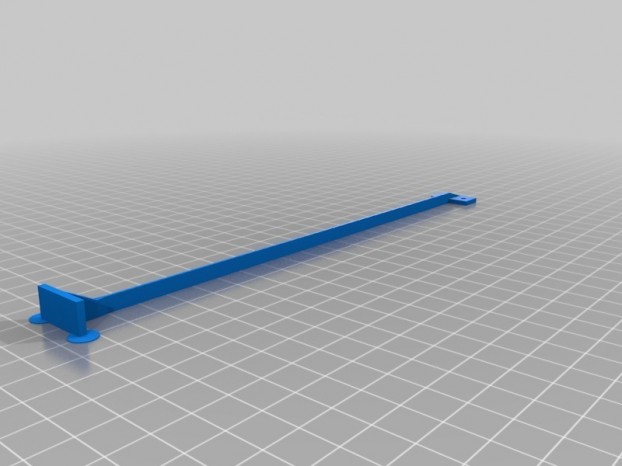 The beauty of 3D printing is not just that all of this is possible, but that you can test out several different designs with very little cost. The first strap I designed was too thick and didn't have enough flex to it to hold the cabinet down. We tried a different plastic and that turned out too brittle. We played around with the thickness and finally found a strap that seemed practically identical to broken one she had brought in both in dimensions as well as flex properties. I think we finally have a winner (and I'm hoping Eric will blog the results and let us know how it looks and works). I've uploaded the part to the Thingiverse so if any enterprising VW owners happen to have access to the a 3D printer they can print their own. When I talk about 3D printing I often mention that Jay Leno uses a 3D printer to print replacement parts for vintage cars that he owns. To me this represents just one of many exciting possibilities that have become a reality due to 3D printing and it was absolutely awesome to get to play a part in that firsthand.